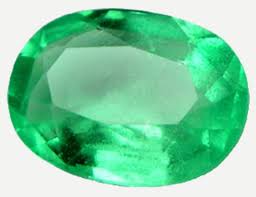 The emerald is considered as one of the 4 traditional gemstones together with the sapphire, ruby and diamond. This gemstone, which is coming from the Greek smaragdas belongs to the beryl family of minerals and means “green gemstone.” 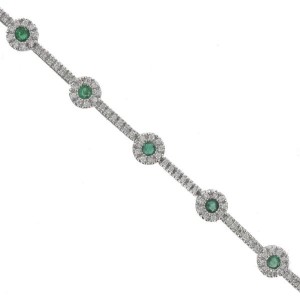 Gemologists say that emeralds have inclusions on its surface and interior. This stone is more fragile than other beryls and that for this reason it should be treated with more care and gentleness.

Emerald lovers claim that these wonderful stones have gardens inside, meaning that its inclusions and / or impurities found in it are its own label identity or fingerprint. However on many occasions these stones are treated with oils and resins to fill some cracks to improve its appearance.

In addition, the emerald is characterized to have a hard texture, a hardness of 7.5 to 8 in the Mohs scale (rating from 1 to 10) and a pure and intense green color.

Where are the major emerald mines situated?

What color are emeralds?

The emerald is characterized by its own color, green. It is composed of traces or impurities of chromium and vanadium ,which is the reason for its intense, strong and brilliant color. However, we can distinguish different shades: its own emerald green, medium or dark green to green and yellow.

Applications and forms of emeralds in jewelry

Emeralds are ideal gifts for the 20th and 35th wedding anniversary. They can be found in rings, wedding rings, earrings, pendants and bracelets. But do you know what sizes of these gemstones you can find? Take note!

Emeralds crystallize in the hexagonal system. The most famous form of emerald in the market is the emerald cut. This can be rectangular or a square with diagonal corners so that its beauty, luster and color is highlighted. However, we also find the brilliant cut, the stairs carving , the cabochon carving (oval, round, heart-shaped or square) and modern or fantasy carvings.

How can you see if an emerald is real?

The emerald is a gemstone that has to be analyzed in the daylight. It is a stone which as already mentioned above, contains fractures across its surface. However, they are  not considered as a defect, its inclusions are the prove that it is an original and not an artificial stone.

Zapata Jewelers would like to give you advice on how to purchase an emerald:

1. Have a close look at the color and texture of the stone to see whether it is natural or not.

2. Make your purchase in a professional establishment you trust where you will receive valuable advise by qualified personnel.

The price of an emerald is defined by its place of origin and its color.

The worlds most famous emeralds and their curiosities 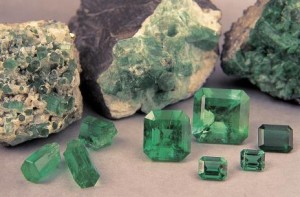 One of the most famous emeralds is the “Mogul Emerald” stone with a weight of 217, 80 carats and a height of 10 cm. This gem is known as one of the largest emeralds found till today. The stone is famous for its size and because it was auctioned in 2001 for $ 2.2 million in London.

As we can see, the emerald from yesteryear has been a stone that has had much esteem. Some antique findings are preserved in museums and collections.

The Natural History Museum in New York has a cup of the Emperor Jahangir on display, the Banco de Bogota is holding a valuable collection of five crystals compromising weights between 220 and 1,796 carats. We can also find collections of emeralds in the Iranian National Treasury or the Topkapi Palace in Istanbul.

The emerald is a stone which has accompanied humans since ancient times.Even the Incas and Aztecs considered it a precious stone, so did the Pharaohs (It was also desired by Cleopatra ) and the Vedas who described it as the stone of great fortune.

Remember … The emerald is a stone that enchants people by its color, history and beauty!